Jefferson County Goes to Pittsburgh to Inform Industry About Rockwool

Eight Jefferson County WV residents ventured to the Steel City October 20 to spread the news of what Rockwool N.A. is doing in their home county.  Pittsburg was the setting for the North American Passive Home Network Conference and Expo. The folks from Jefferson County were there to talk about their home, but were far from passive.

Armed with signs, handouts, and firm determination they entered the conference center around 8am to spread their message, but for three of them the stay was brief. 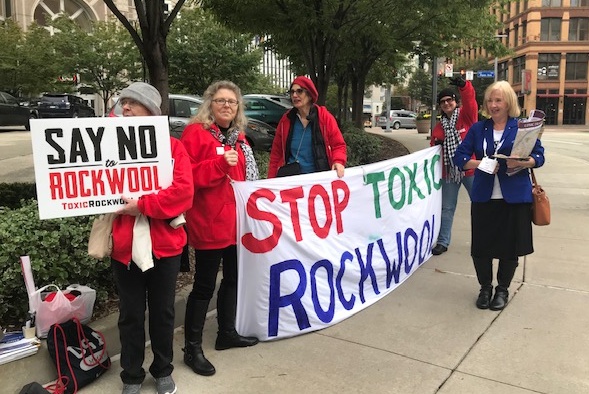 “When we went upstairs to where the conference room was, security people told us that we couldn’t stay with our signs, handouts and Toxic Rockwool shirts on so three of us decided to go outside and talk to people outside” said, Mary Ellen, a Jefferson County resident.  “As we walked slowly down the steps we handed out pamphlets and spoke to attendees as they were walking up the stairs”, she continued.  In addition, one attendee told her, “When the Rockwool representatives come to my office to sell their products, I will definitely ask them about this situation.”  His comments were echoed by another person entering the exhibit hall who said, “This is the first I’ve heard of this, but it is the kind of thing that we are very interested in.”

Another attendee said to a different Jeffersonian, “Holy Sh#t, I just bought $100 thousand worth of product from them.”

Three people removed their anti-Rockwool clothing and went into the exhibit hall.  They couldn’t speak with representatives of manufacturers, architects and the like about the stress and turmoil Rockwool was causing in the eastern West Virginia county, but they did manage to leave some ToxicRockwool fact sheets on Rockwool’s display next to examples of their products.

And of the one remaining attendee from Jefferson County? She, Catherine, had paid the $379 it took for admittance to the actual conference. This is her report:

It was meant to be a celebratory moment, but I dampened the atmosphere when I asked questions concerning the "embodied energy and carbon cost" of their product as I had heard that the manufacturing process was fossil fuel intensive and highly polluting.  Mr. Kimmel and Ms. Nieto sidestepped answering my question by referring me to their sustainability expert who could provide me with the LCA's (life cycle assessment) for the materials. I also inquired about the formaldehyde and other indoor pollutants in these airtight houses since they use a formaldehyde binder in the product.  They responded that the components that include formaldehyde are only used on exterior walls for this reason.

At the conclusion of the session and Q&A, I donned my "Say No to Rockwool" sweatshirt and distributed toxic Rockwool fliers to both the speakers and audience.  My purpose in doing so was to educate both the proponents of Passive House design AND the Rockwool speakers--I highly doubt that they are aware of the unethical plans for the Ranson factory and I want to create internal pressure in Rockwool against the facility. While handing out the materials,  I was approached by a woman who requested the materials, but began disputing the points--even the air permit numbers-she claimed that numbers could be misleading.

When I entered the exhibit hall, I discovered that some of our members had been escorted out, while others had to take off their sweatshirts. I entered the hall (sweatshirt and all) with no objections. Many of the vendors were interested in finding out the details of the controversy and one representative of a cork insulation manufacturer voluntarily stated that they had never considered having an office/facility in HF, but they would now!  I left fliers throughout the hall--on tables with tourist info and at each exhibitor booth (including Rockwool's!). After about 30 minutes, three conference center employees approached me and asked to speak to me outside the exhibit hall. The convention center manager said that Rockwool employees complained that our presence was "annoying and distracting" and the building manager couldn't allow me back in the conference.  They immediately refunded my registration fee ($375), so we were able to spread the word about Rockwool's "not clean and not green" practices for free :-)

Was the eight hour or so round-trip drive worth it? “I think so”, said one attendee. “We got kicked out but we handed out a lot of fact sheets and answered quite a few questions.  One of the security guards even promised to sign our online petition.”